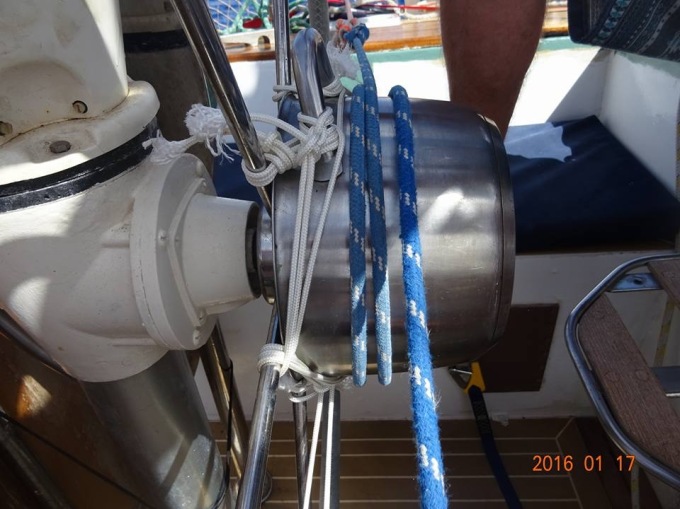 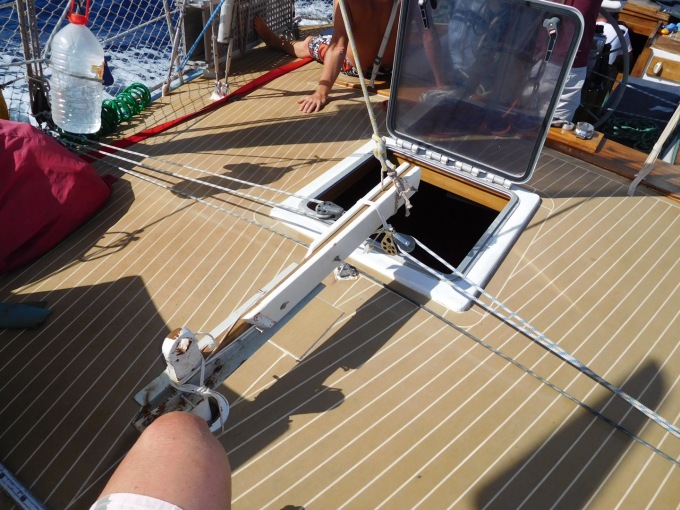 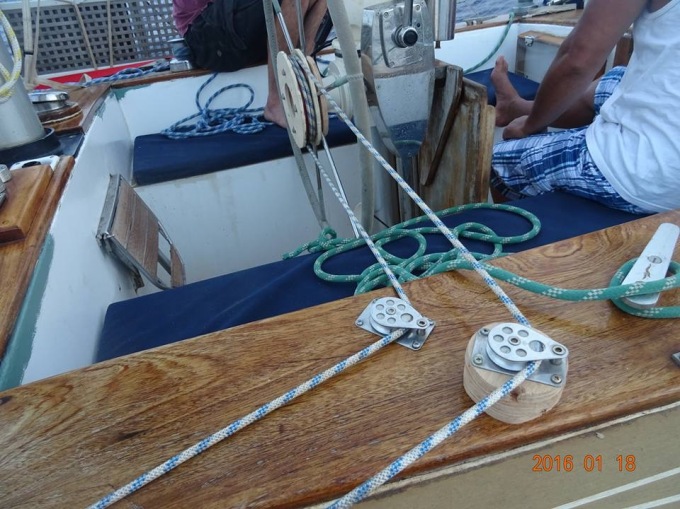 I suppose it was good getting our Atlantic disasters out of the way early on and as the night watches started that evening, everyone was in good spirits. I mentioned watches earlier and to be honest, it was a bit of a problem with six people onboard. We had myself, four solid watch keepers and a person whose first time on a boat was this trip. Splitting into short watches is obvious but creates its own problems. If we go 6 x 2 hour watches it makes 5 x 2 hour watches where someone is unsure and calls me. Then we have a small breakdown and I spend my luxurious 10hours off, fixing stuff, answering questions or trying to get back to sleep. As we knew that the first week was going to be many hours under motor, we had stocked up on lots of meat, in the knowledge that the freezer would be on all the time. That meant Vicky was going to be spending her off watch cooking.  Neither situation ideal.  All the crew wanted to experience as much as possible on this trip, including long and short watches. So day three and for the foreseeable future ran like this. 2pm to 7pm boat is on autopilot, anybody and everybody keeps a weather eye. 8pm to 9pm  after dinner watch, half watching the evening movie, half on watch. 9pm to 11pm new person with an easy short watch into darkness before the moon comes out. 11pm to 2am proper watch, 3 hours, bring a book and get your teeth into it. 2am to 5 am same again. Then at 5am the first guy is back to do a four hour trick, with half of it in the dark and the other half after dawn; then everyone follows up to lunch time, making up their watch time to five hours each 24 hours. Everyday it changes by one person so variety too. This meant that Vick and I did not stand a formal watch, but for sure were on duty a lot more than five hours per day.

Next morning dawned with great hilarity as the only person who could not hear the off course alarm droning away was Andrei aka Moke, who was deep into a Diana Ross album behind his head phones, unfortunately he was also on watch.

Twenty minutes later the ribbing started again and to his defense he was ear plug less. I slipped out our hatch and confirmed that the steering was indeed jammed. Looking back I suppose it’s a good marker for when the trades started to blow. As no sooner had the wind filled in, we were rudderless.

After a bit of Meccano work, we extracted the emergency steering gear from its nest and mounted it. Once in place, we heard nervous titters, a little disbelief and a tad few swear words. ‘ how the fxxx are we supposed to steer with that?’ was the most obvious question. The issue being that after previous modification the prescribed method of using the equipment was to kneel on the bed in the aft cabin whilst someone on deck relayed instructions left and right. We called it the Hail Mary position, as you had a prayer’s chance in hell of ever making it from Meganisi to Vliho, never mind the 1400 miles of Ocean to the Caribbean.

Of course when some thing like this breaks, you always assume it will be a quick or at least a clever fix. None of us had any inkling that mucking around with the hydraulics would go for three days and eventually prove fruitless.

Once we (I ) finally accepted that no 11th minute solution was going to work with the autopilot and we would be hand steering for the next 1400 nmiles, (Vicky and I in our youth hand steered our 7 metre long keel wooden sloop Kara from the Peloponnse to Ireland and I swore that I would never do it again) things went quite smoothly. Let’s face it, with a crew of six competent helms it was never going to be too arduous, but it’s the principal of the thing.

The biggest impact with the whole emergency steering (which by now was onto the mark 3 version and pretty much perfect was to be in our cabin. Originally conceived as a luxurious in harbour double owners suite, it’s short comings at sea I have already documented, which the recent changes did nothing to address. As the steering stock now grew Jacks stalk like from, the DMZ where our shoulders would occasionally skirmish, we had to turn the double mattress thwart ships, generally with the head end to windward. This would mean that on the down roll your feet would end up 1 meter lower than your head. Of course gravity would then take over and you end up as a little pile of yourself on the other side of the cabin from which you laid your weary head to rest. Coupled (an ironic word to come to mind as in this situation there was more chance of snow in said cabin) various bits of the skeleton of the bed frame had been chopped out to augment the inadequate emergency steering. Therefore the topography of the mattress resembled the description of Robert Louis Stevensons ‘adventures on my counter pane’. His imaginings whilst bed ridden led to the writing of Robinson Crusoe, which I hope is not some potent of doom.